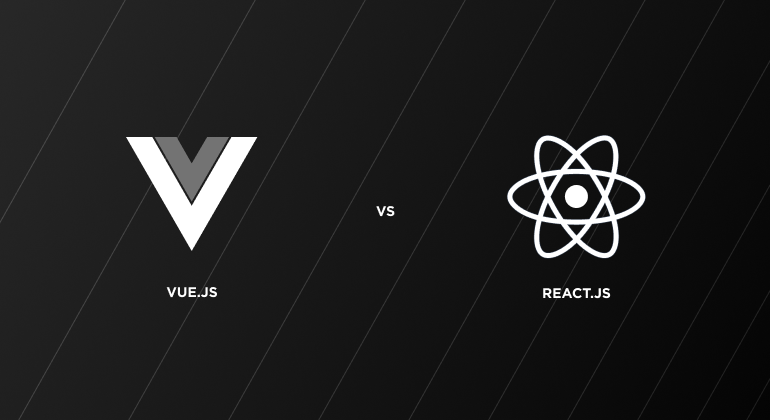 The competition between React.js and Vue.js lasts for several years now and it is something that could not but drag attention. There are developers who wholeheartedly devoted to React, and there are those who find Vue to be a blessing. React vs VueJS is always perceived as a battle of equal entities though one is a framework and the other is a library. Indeed, both technologies are built on JavaScript, both have Virtual DOM and a component structure, and both work pretty well, but the question is — which one is a better web development tool? Let’s see.

React.js is an open-source library that is used for building user interfaces. JS stands for JavaScript as this technology was entirely built on it. React was developed by one of Facebook’s employees — Jordan Walke, and now it is maintained by the company and a community of developers. In 2013 it was released to the public, and since then it became a popular tool used for building single-page and mobile apps.

Vue.js is an open-source progressive JavaScript framework used to build UI and single-page apps. It was developed by one of Google’s former employees — Evan You, who released it in 2014. Vue.js is currently maintained by its creator and a team of active contributors, as well as backed up by the community of developers.

When comparing ReactJS vs VueJS we should consider the benefits and weaknesses of both technologies. Here are the chief pros of React that make it stand out from other frameworks.

Popular Companies That Use React.js

The following companies use React for their web projects and you definitely recognize them all:

Vue framework has more modest download rates compared to its competitor, but it is still a choice of many developers, especially when creating single-page web apps. To understand why Vue js is better than React (and whether it is such at all), let’s see the advantages that it can offer.

Popular Companies That Use Vue.js

Here are some brands built with Vue.js that you definitely know:

Here is a bit closer consideration of the core features of the two competing technologies.

While speed is not the best determinant when comparing Vue.js vs React, performance is what we should consider. Specifically, let’s see the re-rendering features of the two technologies.

As for React, whenever the state of a component experiences a change, it immediately causes the re-rendering of the whole tree of a component. If you do not want some of your subcomponents to be re-rendered, you can still use additional features to avoid it.

In the case of Vue, its mechanism constantly monitors dependencies along the render process and works accordingly. This particular feature improves the overall performance, and it has rightfully made Vue choice developers around the globe.

When working with component-based technologies, one has to carefully consider routing and state management before the software development project starts to scale. You should remember that there is a close interaction and shared data between the components.

Talking about Vue, it offers a slightly better Vuex architecture that is integrated into the framework. It allows you to easily integrate its system of mutations, getters, and actions with your components. Vuex provides programmers with a centralized way to manage the data and offers an easy solution to manipulating it.

Both technologies have superb development environments. Both contestants of Vue JS vs React battle allow developers to easily and quickly cope with the configuration and develop apps that keep up to modern standards. Therefore, as for the development environment, it is likely a draw here since both React and Vue provide comfortable and favorable conditions for software specialists to start the coding process.

JSX is a technology that was introduced by React. It is a JavaScript syntax extension that looks like XML. XML has an advantage in balanced opening and closing tags. This helps make large trees easier to read than functions or object literals. Besides, when using JSX syntax, you write the same declarative syntax but only use what the UI component should be. You outline the UI not using lines, but using JavaScript, with which you can do a lot of interesting and useful things.

Vue, in turn, utilizes HTML-based templates to create views. The fact that HTML is familiar both to novice programmers and seasoned specialists makes the learning curve much faster. Moreover, HTML templates are quite advantageous when improving an app to benefit from Vue's reactivity system.

Vue JS vs React JS: Which One to Choose?

Each of these technologies has its strengths and weaknesses and may not fit any project type. 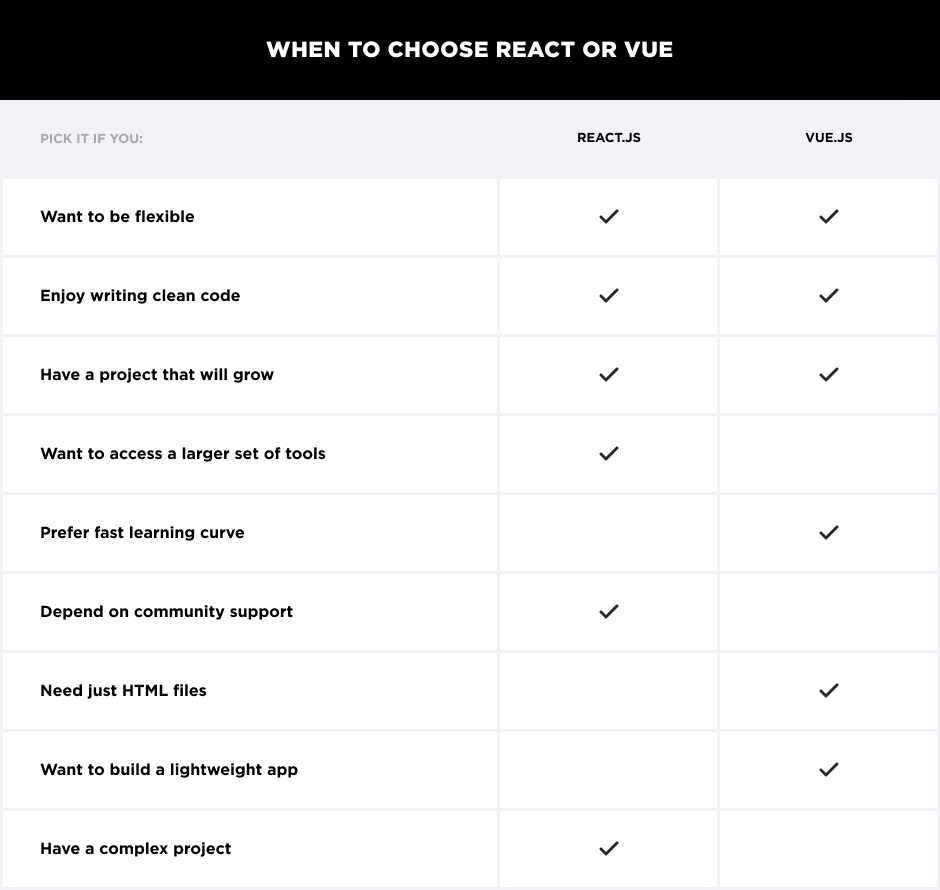 When and Why Vue js is Better Than React?

When we are talking about building a small and fast application that should be flexible to changes, then Vue is likely the winner in the VueJS vs ReactJS competition. Vue allows for creating lightweight products that demonstrate great performance and modern UI.

Besides, Vue might become a breath of fresh air for developers already closely familiar with HTML. The learning curve is faster than in React, and you can train developers within a short period of time.

When to Use React.js over Vue?

React.js is meant for developing large and complex web apps, including marketplaces or e-commerce online platforms. During this long journey, you will be supported by the large and diverse community of developers, thousands of contributors, and those 7 years of continuous development and experience. Over this time, React has grown into a powerful technology that offers a vast variety of libraries and useful tools needed for the realization of complex projects. Besides, you can always use already made available solutions instead of coming up with the one by yourself.

One cannot say that the battle of Vuejs vs React has a particular and indisputable winner. Sometimes a project requires React, and sometimes it is Vue that will hit the nail on the head. Nevertheless, it is undoubtedly that they both are truly powerful and popular technologies, each of which is the best in their own niche.

If you want to learn more about the capabilities of these technologies and how they can be used in your project, feel free to contact the OTAKOYI team.